My Tarot journaling has had an interesting, unintended effect: I’m rediscovering comfort with handwriting.

I type fast. I’ve wholeheartedly embraced computers as a whole and Word documents and apps like Evernote and blogs and online journaling; in fact, one reason I was successful at journaling online (I was a terrible diarist as a kid) was that I could finally write as fast as my brain supplied the words. So, here in 2017, it is perhaps not surprising that I hardly ever handwrite anything. There are even apps for grocery lists.

Tarot journaling, on the other hand, is almost always a handwritten task for me. I don’t take notes when I read for other people, but when I read for myself, I prefer to sit at a table or on my bed, lay out the cards, and write by hand in a notebook. I sketch the spread, note the meaning of each position, write which card appeared in each position, and add a short interpretation. I’m also working my way through the deck via daily one-card draws, and those get handwritten in a different journal. In fact, I’d been writing like that for at least a month before I realized how much effort I’d been putting into penmanship and how little I used those muscles anymore.

But why handwrite, other than the vibe? Why not type?

To answer that, I need to digress a little more.

I’m currently reading Merry Meet Again by Deborah Lipp; I’m working my way through lots of Craft biographies and autobiographies lately. In Chapter 10, Lipp describes working on a coordinated healing ritual and adds a practical note — these appear in each chapter — suggesting that a well-illustrated anatomy book, a medical dictionary, and a medical encyclopedia belong on the bookshelf of anyone doing healing work. “Most spells must, in order to succeed, manifest themselves in the physical world, so understanding the physical reality of healing is a necessity,” she says. And for the medical dictionary, Lipp suggests some good online sources but, she says, “I like having a book on the shelf that coven members can read from, pass around, and bring into ritual.”

Why can’t you just bring your phone into ritual and use it to look that stuff up? This book was published in 2013; people have smartphones now, so it’s not like you need to drag your laptop into ritual space.

There are two main reasons, I think.  For one, the energy flow inside the circle functions much like an electrical current, and electronics sometimes fail or don’t work right inside a cast circle. Particularly intense circles can short them out or break them entirely. And I’m not speaking mythically here; a grovemate of mine once forgot his phone in his pocket during ritual and it wouldn’t turn on afterward. He had to get a new phone. Will that happen in any circle, no matter what? Probably not; it has a lot to do with the quality of the circle casting, the energy raised, the work done, and so on. But do you want to depend on risking your phone to access information you could have just written down, printed off, or gotten from a physical book?

Another reason, and perhaps a stronger one where regular practice is concerned, is that the presence of electronic devices can interfere with the suspension of disbelief that goes along with theater (and ritual is theater). It’s incongruous. Allow Alexander Hamilton Lin-Manuel Miranda to demonstrate: 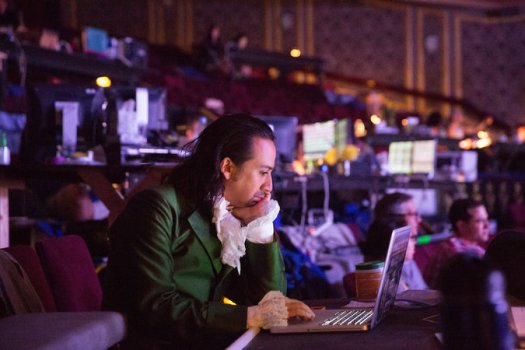 My point: To preserve the bubble of sacred space that you’ve spent so much time and effort to create, whatever you bring into circle should be handwritten (or at least printed off).  I don’t have a whole lot of Pagan ebooks because I might want to bring the book into circle (or loan it out, but that’s another digression entirely). I may type up my rituals, but I’ll print them off and bring the pages into circle, not my laptop or my phone. And I handwrite my journal of Tarot readings so I can bring the entire notebook into circle, do a reading in sacred space, or carry the notebook and cards with me so that I’m not dependent on wifi or a battery to write.

And, also, the vibe.